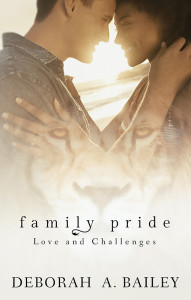 When I got the idea for my paranormal romance series, Family Pride, I was inspired by the TV show, Bewitched. Looking back on it now, I realize I didn’t get all the subtexts.

Here’s Samantha, a witch with the power to appear and disappear, fly, travel from one place to another in a literal blink of an eye. She’s lived for hundreds of years and will most likely live for hundreds more. She falls in love with an average guy and decided to live as a housewife in the suburbs.

Samantha gives up her status for love—though in spite of her husband Darrin’s desire that she give up using witchcraft, she never completely lives a normal, mundane life. Relatives and friends pop in and out, and eventually the children are born with powers as well.

When I wrote Family Pride: Love and Challenges (book 1), I wanted to flip the script. What would happen if a human started dating a lion shapeshifter? She would have to learn to navigate his world, instead of the other way around. But in this world, the shifters are living the regular, suburban life. They have their own customs and conventions, but they’re also under the radar as far as the rest of the world is concerned. Like Samantha, they have powers and rituals, but they have to keep everything under wraps so that the human population doesn’t discover that they exist.

I did some research on lions and their behavior, then added a few twists for the shifter version. For instance, there are challenges for domination and control—which figure into the plot of book 1. The shifters group themselves into prides, which are made up of extended families. So there is a normal world on one side, and the paranormal world on the other and Mac and Zora have to balance between the two.

In Family Pride: Blood Fever, Mac hints that other magical creatures exist in the everyday world (in addition to shapeshifters). 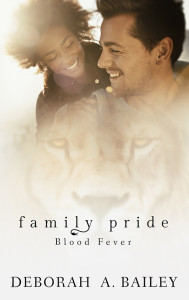 Of course she was going to ask the very thing he wanted to hold back. “I didn’t run into another shifter. There was something out there. I saw a shape in the darkness, like another lion. But it moved so fast…I felt the claws and my instinct took over. I fought, but it was like fighting air. My claws went hrough the thing.”

Zora shivered against him. “Is that possible? That’s unbelievable.”

“Most people think shifters are unbelievable. But here you are mated to one.”

“Yeah, you’re right.” She ran her fingers along his chest. “Some-times that’s hard to believe too. All the things I thought were just stories and fairy tales are real.”

Mac chuckled. “Let’s not get the fairies involved. They can be fierce when they’re pissed off.”

“You mean-” She lifted her head up again like she’d been yanked. “They’re real too?”

“Zora, baby. You’ve got so much to learn.” Mac leaned in for a kiss.

What really interested me about creating the series, was to show how what appears to be normal depends on how you define it. There are all kinds of worlds intersecting all the time, and what you see on the surface doesn’t tell the whole story.