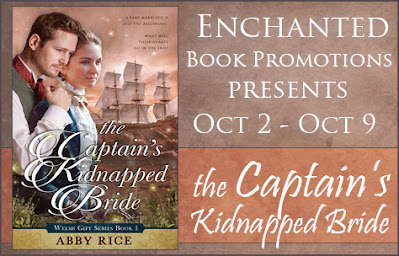 The Captain’s Kidnapped Bride debuts October 1 at the discount price of 99c on Kindle (regular price $7.99)

About The Captain’s Kidnapped Bride 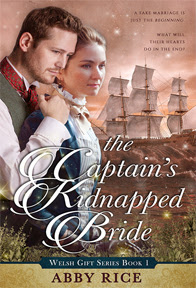 The last thing Hetty Pritchard ever wanted was a husband. Until a joke-gone-wrong lands her aboard an unfamiliar schooner headed for Jamaica — with the Captain himself snoring in the bunk beside her.

Now a ruined woman, Hetty has no choice but to accept the grouchy mariner’s reluctant solution: a temporary fake “marriage.” Purely for show, of course.

And if navigating a ship-full of men, pulling off a fake relationship with a total stranger, and making her way back home weren’t troubles enough? Add in troubling wisps of ‘second sight.’ And an unexpected simmering attraction to her new, fake husband.

A stand-alone sweet historical with touches of the paranormal, and a heart-tugging HEA ending.

Read an Excerpt from The Captain’s Kidnapped Bride

Beneath me was something I presumed must be a bed. And certainly no featherbed. More like a solid wooden plank wrapped in a thin blanket or two, by the feel of it. My hip issued its own silent howl of protest as I flopped flat on my back again.

My fingers twisted the fabric covering the lower half of my body. A woolen blanket, I guessed by its texture. But a rough and unfamiliar one.

And there was something else peculiar about this already-strange place: the bed itself was moving. An undulating, side-to-side motion, like the steady rocking of a cradle, but with an extra flip thrown in at the end of each pendulum-swing.

Where was I? That thunderclap of pain behind my eyes had receded to a dull ache, but now a tingle of alarm began to well up in my belly. I kicked off the thin covers and pushed my feet toward the edge of the bed. I’d simply take it slower getting up, this time.

Just as I began to push up onto my left elbow again a weight settled across my chest. A warm, heavy, weight. An arm pressed me gently but firmly back against the pillow.

“If your head hurts half as much as mine, you may want to try to sleep a wee bit longer.” The voice was deep and growly. And most definitely male.

Adventure really ought to be my middle name. I’ve ridden cross-country on a motorcycle; crewed on a real-life square-rigged ship; built and rehabbed houses/apartments; and helped seek justice for crime victims as a District Attorney.

Nonfiction is where I cut my writing teeth, in over 200 magazine stories. (As you probably guessed, natural health was one of my fave topics!) That led me into books. Take a peek at those and my rollicking history blog on www.Clairitage.com.

These days when I’m not dreaming up new stories about heroines, health, or history, I’m lending a hand to my garden-crazy husband, or scanning 1860s newspapers for bits of forgotten gossip.

I love hearing from readers! If you’d like to connect, drop me an email at:

Get the book on Amazon: https://www.amazon.com/Captains-Kidnapped-Bride-Welsh-Gift-ebook/dp/B09CSXS2CK/