This post is part of a virtual book tour organized by Goddess Fish Promotions.

One randomly chosen winner via rafflecopter will win a $50 Amazon/BN.com gift card. Click on the tour banner to see the other stops on the tour.

Description of Golden Shana: The Chase

An evening at the La Scala in Milan twirls the lives of five people into a web of rivalry, intrigues, heartaches, obsession, murder, loss, and revenge.

Love, a word Roman can hardly spell, hits him when he sees Shana one evening. She’s the first woman not dropping to her knees at his mere presence. Used to getting whatever he wants, he chases her. Only to discovers that she prefers the girls. Roman can’t let that deter him. But is he for once up against his own comeuppance? At any rate, he needs assistance, which comes in the form of Alyssa, Shana’s BFF. Trouble crops up when Alyssa is all too ready and willing to drop on her knees for him.

Roman can’t get anywhere near Shana on his own. Would he start anything with Alyssa as long as this finally leads him to meet Shana in person?

Then there’s Marie, his current companion, who has a life-changing surprise for him.

Roman: I never chased after a woman. Then I caught a glimpse of the woman I would kneel for, but didn’t even know her name. Heck, I determined to find her if it took me the rest of my life.

Shana: He stood in the room with her. The frisson in the currents freaking between them knocked her senseless. The mutual force of predator and prey, blasting into her core … her soul … Danger. Keep far away from him

Read an Excerpt of Golden Shana: The Chase 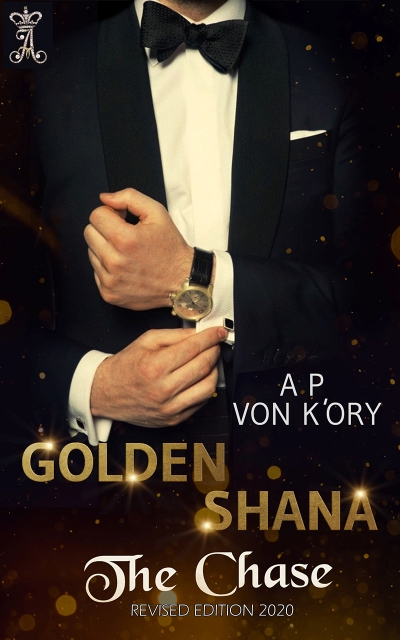 “Marie, what the hell are you doing here?”

“Roman! I could ask you the same.” Her eyes flitted from Bastian to Roman. Bastian had a surprised look on his face that must have matched her own. Here was Europe’s most loaded Adonis heartthrob he’d just mentioned a moment ago.

“I’m here to take you home.” Then he leant in closer to her face. “Both of you.”

This arrogant bastard! “Roman, I’m here to enjoy my Saturday night with my sister and Monika. You said you weren’t coming back to us!” She stressed the us so strongly that it came out like a violent hiss. She was almost livid with rage. Roman had no right to simply butt in on her evening and start claiming rights! He was the one who walked out on them. He was the one who ended their relationship over the phone! He was… shit!

Roman thumped on Bastian’s chest so hard that Bastian had to be held steady by several dancers to stop him toppling over. “You – whoever you are – keep your fucking hands off her!” Most dancers stopped dancing to watch the show. Roman stepped forward to now spit all that in Bastian’s face, their foreheads almost knocking, Roman bending down to make up for the height he had over Bastian. “Have I made myself understood?” he roared, and she feared he might actually hit his forehead on Bastian’s.

Her fury mingled with the fact that even with all of it, Roman inflamed her longing for him, ignited a burst of desire in her for him. Roman in all his infuriating masculine sexiness and stunning perfection that demanded attention like he was some sort of danger or magnificent delight. All eyes, male and female, were on him. She couldn’t believe that she felt a twinge of jealousy at the ogling women. God, was she for real?

But he looked absolutely delicious in light trousers and navy polo shirt and leather belt, Clarks Trimocc Sun, no socks. As if he was about to board his yacht and go for a cool long drink in the middle of the ocean. His clothes didn’t fight with his muscles, they complemented each other. That look and his air of absolute self-confidence, coupled with the aggression, were clitoris activators. The throbbing between her legs killed her.

Why couldn’t he see that he was the only one for her, the Neanderthal jerk? 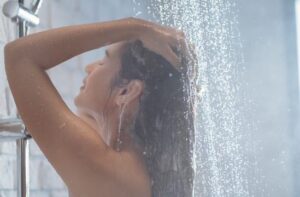 EB: Mr Castell, tell me about yourself, the real Roman A.N.B Castell.

[His smile is as straight as a shepherd’s crook.]

[Those eyes and the smile are really hard to deal with. As a woman, and believe me I’m not the timid sort. But he only granted me one minute with him – yepp, ONE. He dictated that as the condition for this chance in a zillion to interview him. There might never be another interview granted for the next decade. To anybody. So I skip asking the background questions and dive in.]

EB: Is it true that you and Ms Marie Berg broke up at the opera house La Scala in Milan? If so, why? You’ve been together for the longest time known in your history with the ladies as Europe’s Most Chased-After Bachelor & Dominant.

RAC: I’ll answer this for both of us – myself and Ms Berg. We’re no longer sleeping with each other, but we’re the best of friends. In fact she may be my only close female friend. And I never answer any whys about my actions in public, Ms Berkley.

[Dang. I’m still chewing his first sentence in my racing brain. Was it coded? Like: Don’t you dare bother Ms Berg?]

EB: Mr. Castell, there have been talk in certain elite circles about you actually chasing a lady, Ms Shana Lindqvist. Could you make an exception here and answer why you continue this quest when you can have any woman in the world at the—

RAC: For this once, Prof Dr. Lindqvist is my novelty. She ups the anticipation while cancelling out the expectation. I prefer a woman with fire in the belly. The harder she battles me, the harder I get. I don’t want a Stockholm syndrome relationship, with her bending to my will and doing everything I demand or anticipate, to please me, her captor. Instead, Prof Dr. Lindqvist captivates me with womanhood defiance of the highest order. We are two sides of the same scale. In order for the equilibrium to be maintained, for us to work, we have to each have equal weight. That’s her, my woman.

EB: That’s not exactly what is associated with a Dom, Mr. Castell.

RAC: You should never associate Dom with me, ever, Ms Berkley. Look for that breed elsewhere. I need a unique challenge. When all my commands are meekly followed, where’s the challenge? What’s left there to dominate?

EB: You sound as if you and Ms—ah, Dr. Lindqvist are already an item. Anything we, as the public, should probably know?

RAC: You should learn the art of listening, Ms Berkley. I’m a Domristocrat. One of a kind. And I’ll make Dr. Lindqvist my woman. My Subristocrat. I’ve patented those two words just for the two of us. A full century patent.

[I don’t know why I call him Sir – it just slips out of me. He smiles. I dang near fall off the park bench, shift a little away from him. His aura-pull is forbidden and outlawed in Christendom. Or should be.]

RAC: Again, I derive no joy from boot-licking servility of the current trends in the scene, Ms Berkley. It has no originality. What I need is a woman with fire in the belly, dynamite in the brains and an indomitable spirit. A woman who would give me a good fight before I brought her down under my command. A woman who offers me half a dozen wars in hundreds of strategic battles simultaneously. A Domristocrat’s woman. My woman. The woman worthy of everything I am. Did you get me this time, Ms Berkley?

[Gulp. OhJaysusLordGulp. I’m not sure I did, and I’m not asking for clarifications. I dread what I might hear. For my own womanly safety. Normally I’m granite. I have a reputation and have been labelled “ball-crusher” in my career as a journalist. My column, Emancietta’s Column, is dubbed Emasculetta’s Column.]

EB: It was an intriguing explanation, Mr. Castell. You’re a determined man.

[He adamantly refuses to call me Emancietta, even after I’ve asked him to do so several times.]

EB: So, Sir, what’s the difference between a Dom and a Domristocrat?

RAC: Me. I’m one of a kind. Patented, remember?

[His listing-to-port-smiles are nipple clamps; you can quote me on that. And then the under-look? Lordamercey!]

RAC: I’m thrilled she isn’t. That’s why she is my woman. She’s no submissive, she’s Subristocrat, Ms Berkley. And now, [he looks at his Midas watch] Time up. [He rises, like an unfolding laid-back panther, towers over me, and holds his hand out.] But I enjoyed the minute.

[My hand has found its way into his ultra-soft palm… He eyes me with that go-shower-little-one look.]

EB: Thank you, Mr. Castell. The pleasure’s mine, Sir.

I watch him stride smoothly across his park to his Limited Edition Veyron, not any of his chauffeur-driven limos. Black and maroon. I watch him drive himself off like a god in his own version of a chariot, out to outdo any other modern Ben Hur who would dare.

Wow. Make a note and chisel it on marble: I, Emancietta Berkley, had a private interview with Roman Alastair Northcott Broughton Castell, on a sunny May midmorning in front of the statue he dedicated to his mother, Lady Marissa, at the RAC Business Park, for over one minute…

About Author A P von K’Ory 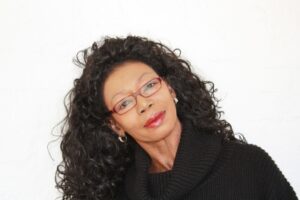 A P von K’Ory writes the kind of books she herself would like to read and is passionate about, whether romance, psychological thriller or nonfiction. She is the winner of six awards from four continents, the last one being the Achievers Award for Writer of the Year 2013 in the Netherlands.

The Selmere Integration Prize was awarded her in 2014 for her engagement in helping African Women in the Diaspora cope with a variety of domestic and social problems. The Proposal, a short story, won the Cook Communications first prize in 2010 and is published in an American anthology Africa 2012. In 2012, she won the Karl Ziegler Prize for her commitment to bring African culture to Western society in various papers, theses, and lectures. Again in 2012, her book Bound to Tradition: The Dream was nominated for the 2012 Caine Prize by the Author-me Group, Sanford, and in 2013 she was shortlisted for the Commonwealth Writers Prize.

Von K’Ory is married to an aristocrat and politician of Franco-German descent, has a large extended  family. She lectures Economics and Sociology in Austria, Germany and Switzerland. She’s migratory and – weather willing – lives in Germany, France, Cyprus, and Greece.

She may be reached at any of the following:

Sign up for news about me & the family, ARCs & Freebies:

Want to join up and receive ARCs from my next (or current) books? Please join the discerning readers at the link below: https://www.facebook.com/AkinyiReadersReviews/

It would be lovely if you could Like the book page and read the latest interviews and news about Shana and Roman on Facebook at:

It would be equally wonderful if you could Like my Author page and read more about Shana and Roman new releases, cover reveals and what I’m up to lately on Facebook at: