“Once Upon A Princess” Fantasy Romance Fairy Tale Novellas

No cliff-hangers. One complete novella. Mature readers only. 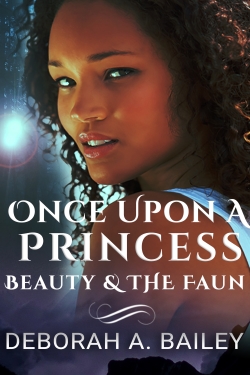 Buy Link for Once Upon A Princess: Beauty and the Faun

About Once Upon A Princess: Beauty and the Faun

In order to settle their debts, Kayla’s rich uncle and aunt arrange for her to marry an ill-reputed prince from another land. She and her mother were forced to live with these well-to-do relations after Kayla’s father, a simple woodsman her mother gave up aristocratic life to marry, died. Favoring her own two daughters, Kayla’s aunt fully intends to marry them off to the richest lords that will have them. She couldn’t care less what happens to Kayla…so long as she doesn’t run off with a penniless commoner.

The idea of marrying someone she’s never even met holds no appeal for Kayla.  The foreign prince’s standing in public opinion does nothing to convince her either. He refuses to attend the fancy balls, court the lovely and available young ladies of the land, and sometimes disappears for weeks at a time. Planning to hide in the Great Forest, she meets Del, a faun shifter who looks forward to teaching her a few things about life and love. If only all her problems could be solved magically by her fairy godmother. Even if she’s fallen in love with Del, how can she hide from her duty to marry the prince when her own mother will suffer if she refuses?

Read an excerpt from Once Upon A Princess: Beauty and the Faun

He led the way up the winding stairs. They went around and around, until they were up on the second landing. Kayla stepped off the top stair and refused to look down. It was just a round hole in the floor, so she could still see the downstairs. The entire second floor was his bedroom, evidently.

Del set the lantern down on a chest across from the bed. He got a candle and lit it from the lantern light. “You must be tired. Maybe you should get some rest.”

The bed did look comfortable, with its green and yellow patchwork quilt and the fluffy pillows. Up here the walls were painted a soothing blue, and the two windows had curtains that fluttered in the breeze. Other than the bed and the table, there was a rocking chair and gold trimmed mirror on the wall opposite the windows.

“Where will you sleep?” she asked.

“There’s only one bed, my lady. Where do you think?”

“With me? In the bed?” Kayla gasped. She’d never shared a bed before, especially not with a man.

“You don’t trust me? I brought you here to protect you and I don’t even know your name or where you’re from.” Del perched his hands on his hips. “Or maybe I should turn you back over to those satyrs who chased you.”

“No, don’t.” Better not antagonize him. She’d had enough drama for one night.

Reviews for Once Upon A Princess

“Another fun and sexy fairy tale! “Once Upon A Princess: Beauty and the Faun” is the second in a series of shifter novellas that combine a steamy romance with unusual paranormal characters. Deborah A. Bailey has invented a detailed fantasy world where fauns and other mythological creatures live in the Great Forest. Kayla is looking to escape an arranged marriage and finds herself at the mercy of a faun shifter named Del. I loved the chemistry between the two as they got to know each other and developed a steamy love affair. Fans of fantasy and shifter romances will enjoy this book.” – E. Kelly

Read all of the Once Upon A Princess Reviews