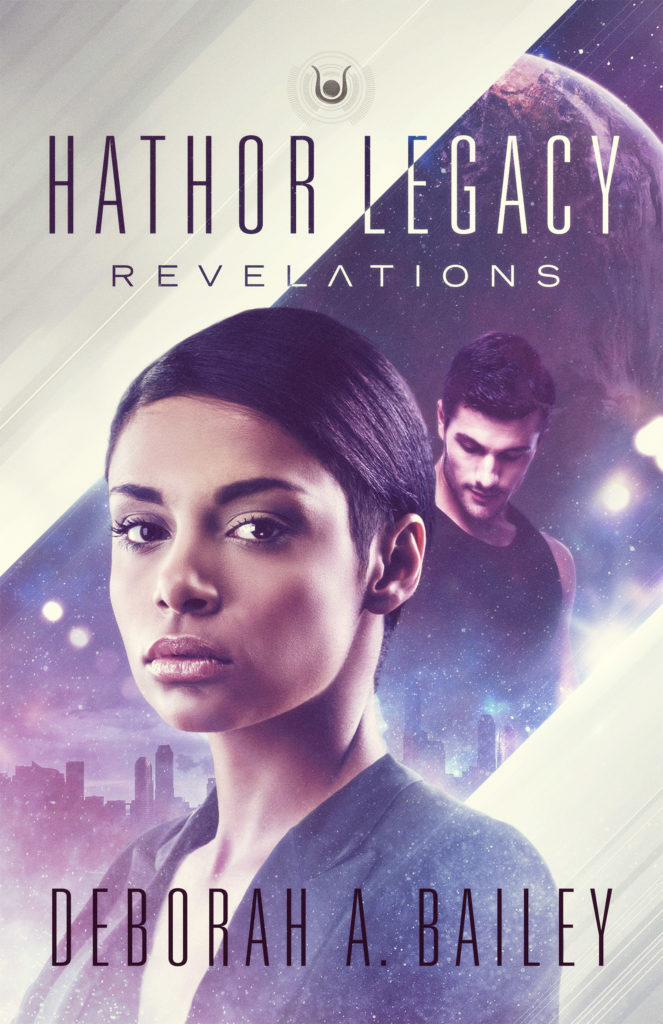 With tensions reaching the breaking point between the Guardians and Novacorp, an enemy returns and the most powerful Guardian learns the truth about her parents that will not only destroy her loyalty to the security force she’s given her life to serving but also to the man she loves.

While Sentry Leader and Elder Nadira searches for answers, her lover Jonathan Keel is enticed into the hedonistic world of the Novacorp executive class. His entertainment club, Secrets, attracts the elite of Hathor, providing the kind of popularity he never imagined. But this notoriety comes with a soul-stealing price…

With the worlds the Guardians and Novacorp rule put on a collision course, only one can come out victorious while the other is enslaved. The only way to salvage the legacy of the First Families, the original settlers of Hathor, is by making the ultimate sacrifice. But is no choice better than a bad choice when the three PSI groups–the Guardians, the Deshtu, and the healing Kasema–either have to unite or risk being brought completely under Novacorp’s ruthlessly oppressive dominion?

With old scores to settle and long-hidden truths thrust into the spotlight, Nadira and Jonathan…and their love…may never be the same.

Nadira’s unknown family history surfaces when Mikal, the man sent to the colony, escapes and is found in Nadira’s father’s old ship. The very ship her father was lost in twenty years ago. Jonathan’s growing popularity with his club, Secrets, creates new complications that he and Nadira have to wade through, all about popularity and people’s executive profiles. It’s all politics of some sort and Jonathan is stuck in the middle, hating it, while Nadira is fighting to keep her people safe at Hathor.

The little extras that narrators do help make the book all that more interesting. Kristin has a talent of adding a bit of that flare to her work. Nadira and Jonathan have a psychic ability to mentally speak and in doing this Kristin does this in a way that you know it’s not normal speak – there’s a sound like it’s dreamy or echo-y but clear to hear. Kristin does different voices for the characters, making them easier to differentiate when listening to all together.

We are reintroduced to the main characters, and those around them, in the first chapter. This is so well done as it’s about now and how Nadira and Jonathan are living. But we see what had happened as there is a new worry as of today. Mikal has escaped from the penal colony he was imprisoned on, after the Burn Order was carried out.

I was hooked to the story. It was a growing mystery about Nadira’s parents and more. There is some connection to them, their disappearances/deaths, and others. But what is it? What is the truth? I had to know! So much new information to take in! I was enthralled with the story!

Sometimes I’m so drawn into the story I forget to make notes for the review. It’s a good thing! It happened with this story. I was so intent on listening to everything that happened and all the details, living with the characters and enjoying all scenes, that I didn’t want to stop to make notes.

Deborah had me worried for Nadira and Jonathan in this book. I worried for their connection, their lives, and their well being. I was saying to myself, a few times, that just can’t be…they have to….there’s a hint for what I want, or am I reading to much into it. I love when an author has me question myself and what’s happening, it’s all done in a good way and keeps me guessing.

This book seems to conclude a period of Nadira’s life that was stressful. But, in the end I heard about the next book that’s coming. It’ll be done with a character we got to see in this series. Cool beans!

Mikal, the demented Sentry from the previous story, who was imprisoned in a penal detention facility after setting fires and killing several people, escapes and returns to Hathor. He still wants his rightful place in the power structure, and Nadira as his partner. Telling lies to Chairman Santos, the ruling government body of Nova City, he again tries to place the blame of his criminal acts on Nadira and Jonathan. Santos, who is being challenged for his seat by Jen Montaigne, sees an opportunity to stop her and the PSI class from taking control. Instead of sending Mikal back to the penal detention, he uses him in his battle to maintain control.

In the meantime, Nadira is searching for her family and answers to the past, while Jonathan is placed in a position he doesn’t want. He only wishes to be with Nadira and back home with their families. To make matters worse, the PSI groups want Nadira’s powerful PSI abilities to connect all their groups in a web, which will give them stronger PSI power, and the ability to stop Santos and Novacorp from complete control over them.

“Revelation” brings many answers that Nadira has been searching for, and really brings this story arc to a close, though there are more adventures planned. This is one of my favorite series, well written, with good characterization, and fast action. I didn’t want to put the book down until the end, and even then I wanted more. Yes, there is some romance, but it doesn’t overpower the plot. It’s plot and character driven, and SF fans will love it. I know I did. Highly recommended.