Book 1 in the Hathor Legacy universe! 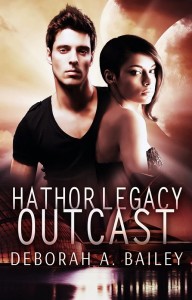 All bets are off when the most powerful Guardian working for Novacorp–already questioning the elders within the organization–is felled by betrayal…and love.​

Guardian Sentry Nadira uses both her intuition and telekinetic powers to keep the capital city on Hathor safe. Unwillingly separated from her mother when she was only eight years old in order to begin her training that will eventually strip her entirely of her former identity, she isn’t sure whether to trust her employer when disturbing suspicions arise.

The son of a mining company CEO on the nearby planet Astarte, Jonathan Keel has known a life of wealth and privilege, something he’s channeled into the social entertainment clubs he runs rather than in joining his father in the family business. When his dad turns up missing following an explosion intended to cover up a theft at the mine, Jonathan has no intention of letting anyone stop him from learning what happened. The last thing he expects is to become a suspect in the robbery.​

Nadira is charged by the elder Guardians with protecting Jonathan from those who seem intent on killing him for reasons as yet unknown. In the process of doing her job, she learns that her employer has an agenda that’s preventing her from learning the truth behind the situation. Growing doubts–and an unexpected attraction to her reckless charge–quickly throw her already wavering loyalty to her duty off-balance.​

After discovering evidence of Jonathan’s father’s possible involvement in a conspiracy, the two flee the city, not knowing who to trust while they try to get to the bottom of the dangerous mystery they’ve uncovered. Learning that their pasts are unfathomably linked forges a volatile, life-altering alliance between them…even as the truth coming to light threatens their futures.​

Standing back to let the transport door slide open, he scanned the area. No security in sight. Good. They were leaving him alone. Jon was about to climb into the vehicle when he saw a familiar face across the street. Wasn’t that Nadira, the Guardian? No. He had to be mistaken.

Wait. A few pedestrians filed past her, blocking his view for a moment. She was looking up at the tower. Squinting as though she could see inside it. What was she looking for?

Their eyes met. Did she just jump, or was he imagining it? Oh no. She did react. He was sure of it. What the hell did she think she was doing by following him? He looked at the transport, then back over at Nadira. Was that a smirk on her face? Damn it. She was daring him to come over there.

So, she thought she could just track him across the city and he couldn’t do anything about it? It didn’t matter to him if she was a Guardian, or whatever she called herself. He wasn’t going to be treated like a common thief. Jonathan hitched up the strap of his travel bag. He wouldn’t even bother to use the pedestrian bridge. It was half a block away and would take too much time.

Walking around the transport, he stepped into the street. There was a break in the traffic. If he moved fast, he could make it across without a problem. The transports were programmed to stop for obstructions. But whether they could stop short if he ran out in front of them was another matter.

Nadira darted down the side street. She wouldn’t get far. Jonathan dodged a couple of passing vehicles on his way across the boulevard.

He made it to the opposite corner and in his haste, banged into a company worker. Flashing Jonathan a scowl, the man smoothed his dark brown jacket. But Jon didn’t have time to apologize. Nadira was up ahead, just a beat away from running.

Not that it mattered if she ran. He knew he could get her. She was obviously fit. But he had longer legs. And a lot of practice catching what he wanted.

“Nadira!” He called out, reminding her that he was still there.

Ignoring him, she kept up the pace. Skillfully weaving between the oncoming pedestrians without touching them. She moved gracefully. He enjoyed watching her. Just like he was enjoying the chase. But unless she could disappear like a holo, she wasn’t going to escape him.

The whole novel is overwhelming, to be precise. I fell in love with the characters immediately, and they never let me down. Oh, Jonathan does appear to be a spoiled brat at first, and women swoon over him, but Nadira brings out the best in him before the story concludes. If you like science fiction, action, and adventure, you will love HATHOR LEGACY. Highly recommended. http://pulplair.blogspot.com/2015/08/hathor-legacy-outcast.html

I ended up getting this as a gift from a friend who thought I would like it and I have to say that “Hathor Legacy: Outcast” turned out to be a thrilling, science fiction mystery novel that managed mix romance with a sharp plot and strong characters. Deborah A Bailey did an excellent job of bringing this world to life, her talented world building is clear in the fully fleshed-out characters, the attention to detail to even the smallest inconsequential parts of the story and with the distinctive flair of imagination throughout the book.

The book centers around Nadira and Jon, two people who find themselves caught up in a world of conspiracy, danger, far reaching plots and betrayal that leaves both of them reeling as they try to unravel the mystery of Jon’s father’s death. The story is set in a futuristic time where humanity has reached out far into the stars with the planet Hathor (and the company Novacorp that pulls the strings of the entire goings on within the planet). As the two fight together to uncover the truth they grow closer, their attraction unfolding into something more… but the danger of those around them may just prove to pull them apart before their romance truly starts to flourish.

This is a well-written novel with characters that resonate with the reader and make you care about not only them, but their blossoming relationship between Nadira and Jon as well. It’s fast-paced, entertaining and exciting in equal turn… managing to keep the reader sucked in until the very end and long after that. Overall, I really enjoyed this and am eager to read more from the author in the future. – L. Collins via Amazon.com
Loved it!

Hathor Legacy: Outcast was a unique reading experience for me. The author’s writing and descriptions made it so that I had to keep reading. It was hard to put down. It was one of those books that made me disappointed to get to the end. Is there a sequel? I’m waiting!” – LB

There is something intangible about this book that just makes you fall in love with it. The characters are complex and believable. I loved Nadira! If you looked up “kick butt heroine” in the dictionary, the description would be about Nadira.
Jon was also good in his own way, but I definitely liked Nadira more. I’m not really sure they fit as a couple….but as we all know, not everyone does!

Hathor is futuristic, but also very believable. The author was able to draw pictures in my mind and now I feel like I myself have been to the plant Hathor. Overall, it was very enjoyable. Really hoping for a sequel! – Momto4BookLover