Book 2 in the Hathor Legacy universe 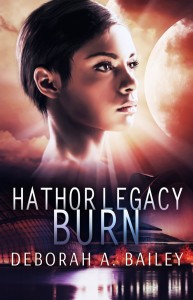 Available on Amazon, B&N, Kobo and other online booksellers: https://www.books2read.com/u/mK9N5B

An old threat re-emerges that may permanently sever the already precarious alliance between Novacorp and the Guardians, the psychic security force the corporation has gone far and beyond to put completely under their own directive…

Sentry Leader and Elder Nadira is called to investigate a rash of fires throughout the city and uncovers the shocking truth about the Deshtu, another group with PSI powers like the Guardians, who’ve been purposely kept in the shadows. The Deshtu are being kidnapped for their abilities and forced into services far from basic skills like predicting the future and healing minor illnesses. The underground human trafficking of psychics for sexual purposes she exposes is in direct violation of corporate rules.

But those horrors are just the tip of the iceberg: Nadira learns the brutal truth about the origin of the Guardians along with the Guardian Elders’ nefarious plans to make her abilities even more powerful. In the process, the psychic connection she shares with the man she loves, Jonathan Keel, will be terminated while another unwanted link is established in its place.

The final clash between the Guardians and Novacorp threatens to plunge the planet into utter chaos as Nadira risks everything to save herself and those she loves from the final, unforgivable betrayal.

Another gem in this series. Deborah A. Bailey has a gift for weaving tales of intrigue, plotting, and detective work, all placed a futuristic offworld venue. For the most enjoyment, I suggest reading Hathor Legacy Outcast first. I received a free copy of the audio version of this book in exchange for an honest review. @Paterry (Bookbub)

*This audiobook was provided by the author, narrator, or publisher at no cost in exchange for an unbiased review, at my request.

It’s rare for Guardians to be called for fire cases but Nadira is called in by Lt. Tamara Lin to investigate a fire at a Service House that she finds suspicious. Elder Dakar has requested to see Nadira. He has plans for Nadira and her abilities, and a big future for her. Elder Dakar’s assistant seems to know a few things about Elder Dakar and keeps presenting himself to Nadira. Jonathan has been staying on Hathor and wants to open a club here. He finds himself pulled into the Corporate world present on Hathor. Nadira and Jonathan learn that the connection she created between them is not liked by those higher up the Guardian chain. But when things get personal and the fires persist, almost harming Nadira. Jonathan and Nadira will have to make some hard decisions as Nadira tries to solve what is going on in the Guardian hierarchy.

Kristin, once again, displays why she is one of my favorite voices in narrating stories. She becomes the story and the characters. She starts with emotion in her voice for the opening scene and throughout the book. She easily performs accents to differentiate the woman and men speaking. Each has their own personality in voice, attitude, tone, and presentation. By doing this I can see the character as Kristin’s presentation is paired with Deborah’s words. This makes it so easy to dive into a new audio book and not get lost.

We get to see Nadira’s abilities in action right off the bat. I like this as I’m one that’s into abilities and powers. And there is no delay in getting into the story here.

There is so much more to the Corporate and Guardians in Nova City! Very interesting to see the inner workings of the Guardians and their work relationship with Corporate. The history come out in more detail here as well. Very interesting and I love the growth of it all here.

There is romance present, but it’s not the center of the story. It’s a lovely addition to the story and shows the beautiful connection our couple has. Even though I worry of Nadira and Jonathan’s relationship, Nadira and Jonathan are adamant they are together. I’m so glad for this unwavering believe in them. There is so much going on in the world around them that it is nice to see a solid feel between them. They trust in each other and always give each other the open to make their own decision on if they stay or not, but that they both love each other is always there and we know the choice if it needs to be made.

I figured I knew who was behind the troubles in the city, but I wasn’t exactly sure why. I loved the suspense and worry we felt in the circumstances Nadira, and Jonathan, found themselves in. The story built on itself and all the knowledge we were learning as we went. The systems here are so much larger than imagined, and things are going to change.

This book ranks among the top of the top. For the story that’s written and the depth of the world with a touch of romance, belief in others, action, worry, and the narration. I could go on and on about the written story along with narration here. But I’ll stop before I bore you with all the gushing.

But I’ll leave you with one last loving sharing paragraph.

I can’t express how much I enjoyed this story! The plot and events that take place in this story. The relationship with Nadira and Jonathan. I JUST LOVED IT ALL! Sure, it’s a romance and there are rather intimate moments, but the plot and story line was so well done. Deborah Bailey is jumping up my favorite ladder with this story (series). And Kristin with the vocals. WOW! I felt like I was there listening to everything in person.

An Imaginative, Engaging and Fast-Paced Sequel

In January I happened to be recommended Hathor Legacy: Outcast and absolutely loved it… from the imaginative paranormal/sci-fi elements to the charming romance between Nadira and Jonathan. So when I found out Deborah A. Bailey had released a new novel in the series I eagerly dived in and wasn’t disappointed. The author draws readers back into the world of Hathor as Nadira’s charge as a Guardian becomes even more muddled as hidden secrets and far reaching plots endanger not only her, but all of Hathor and her boyfriend Jonathan as well.

The well-written novel is a wonderful mix of science fiction, emotional drama, vivid action/adventure and suspenseful mystery. It’s fast-paced, engaging, sharply written and features a main character that is authentic; Nadira is strong, fierce, capable, charming and wonderfully real as a heroine. Ms. Bailey does a fantastic job of sucking readers in with boundless storytelling and an imaginative plot arc that feels like an epic space opera in the making. I’ll definitely be eagerly waiting for the next book in the series, because Nadira’s story is decidedly engaging and entertaining. – L. Collins via Amazon.com