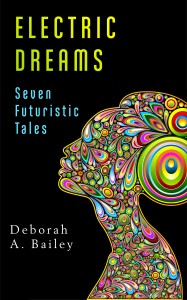 Seven short stories of the future

A collection of speculative fiction stories set in future worlds from Earth to the far reaches of the solar system. At the intersection of technology and humanity, what could happen?

Electric Schemes – A frustrated employee plugs himself into his computer everyday in his boring job, but when his micromanaging boss tries to get him fired, his computer decides to take charge by managing his career.

Between the Mirror and the Heart – A robot is ordered as a lover for a human woman, and as he adapts to his humanity, he realizes his human buyer is having second thoughts about their relationship.

On the Beach – The last caretaker of a lonely space station must stay there alone for three months to shut down the systems, so the station computers come up with a plan so that she’ll have company.

Stranger in Town – Desperate to survive in the harsh 21st century dystopia, a mother agrees to be a mail-order bride to rich foreign businessmen, but what will she have to sacrifice in order to provide for her family?

When Words Leave Off – During a deep space mission, what else is there for two officers to do except fall in love?

Roots of Deception & A Place in the World – On a faraway world, a woman must decide what she’s willing to risk in order to guide her planet to peace after a devastating war and military occupation. Caught between personal sacrifice and self-interest, she discovers that achieving absolute power always comes with a price. 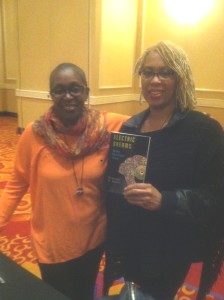 “A Feel of The Twilight Zone.”

This collection contains seven interesting tales of the future: 1) ON THE BEACH 2) BETWEEN THE MIRROR AND THE HEART 3) ELECTRIC SCHEMES 4) STRANGER IN TOWN 5) WHEN WORDS LEAVE OFF 6) ROOTS OF DECEPTION and 7) A PLACE IN THE WORLD.

ON THE BEACH features a lone woman on a space station, her only companions are computers, and they’re slowly taking over all systems. She thinks about the beach, and how nice it would be there among people, when she suddenly hears voices. Children’s laughter. She can only question the computer if she is going crazy.

BETWEEN THE MIRROR AND THE HEART was my favorite story. A human woman purchases a Companion, a male robot named Kyle. But problems arise when she discovers she is in love with him. Leaving him alone, she travels to another planet on her job, perhaps to put him behind her and find human companionship. While she’s away, Kyle meets another Companion, and when her human becomes ill, and she must leave, Kyle invites her to stay with him. Will this complicate things?

ELECTRIC SCHEMES follows an office worker and his computer. He’s being taken advantage of by his boss, and the computer doesn’t like it.

STRANGER IN TOWN is more an Urban Fantasy, about a woman who lives in poverty until she meets a stranger who offers her marriage and a future. But he’s somewhere far off, and she’s waiting for his return, and the fulfillment of the promise. A good story.

WHEN WORDS LEAVE OFF is really part of the same universe that we find in the following two stories. Lt. Commander Tasha Grant and Benjamine Tragg are researching language encryption and it is time to present their study to the Commodore and visiting professors. They are on the ship Marlo above the planet Demeter, where Fleet Base Three is located. Meantime, Tasha is preparing for a concert, and time is pressing. I really like what the author says in Tasha’s voice: “Even if I hadn’t won, it was worth it to have competed. It’s not about being judged, it’s about being confident in who you are and what you can do.”

ROOTS OF DECEPTION: Akida Shera, the Kuhani and Kasi (religious leader) of the planet Tulluran, must help her people rebuild their civilization after the Kellian occupation. The Terrans have set up Fleet Base Three on Demeter, and offer protection against the Kellians or any other invaders, but things are not as simple as all that.

A PLACE IN THE WORLD still follows Sheras kuhani, the Kasi religious leader, as she must maintain control of her world, even if it means challenging the governing body and the Commodore on Demeter for power. There is much division between the people on the subject of the Terrans having power on their world.

These were all interesting yarns, with a touch of the Twilight Zone in a few, while the last three stories introduces us to the beginnings of the Hathor series. The planet Demeter will also be in that universe. But take each of the seven stories for their own brief read for what they are, science fiction from the mind of a fan. I think readers will enjoy them. I know I did. Highly recommended. – Virginia Johnson

“If you are looking forward to cuddling up on the sofa some afternoon with a cup of spicy cocoa or lounging in a hammock with some lemonade than I recommend this book. The stories were fun and the perfect length for my busy schedule.

I really enjoyed “Electric Schemes” and “Between the Mirror and the Heart”. Her story, “On The Beach” had me in suspense. I wasn’t in love with the last two stories, but they were still good.

The price is great and the writing flows. I hope the author writes another book of shorts.” – Leah Oviedo

Read an excerpt from “On the Beach:”

“Lieutenant. You really should go to bed. You need your rest.”

“Are you afraid? You never seemed so before.” Her voice seemed much gentler.

I sighed. “Maybe you’re right.” I swung my feet off of the console and stood up. She was right, my bed was much more comfortable than a badly-padded chair. “Did you finish scanning?”

“There’s a small malfunction in the communications wiring. It might require a manual override. I’ll attempt to fix it.”

That explained everything. Communications had a problem, and that had to be why I was hearing voices. It was probably picking up stuff from the planet. I suddenly felt totally silly. I’d certainly been in space before for longer amounts of time than this. After 10 years in the service I certainly couldn’t be cracking up now.

“Keep me posted on that, and unlock the door.” I called out. The door opened with a hiss.

“I’m lighting up the area, Lieutenant, so you won’t have to find your way in the dark,” the computer said.

“Thanks.” I was a bit surprised by her concern. She usually acted as though my presence wasn’t really necessary, which was true. Computers had replaced people on most of the space stations, even the research facilities.

The next few days were uneventful. I didn’t hear any voices, though I started to wish for something to break the monotony. Too bad I forgot to be careful what I wished for. A week after hearing the voices, things got worse.