Click the links to find out more about the novels and get buy links for the individual books.

The Hathor Legacy series is also available as a trilogy box set. 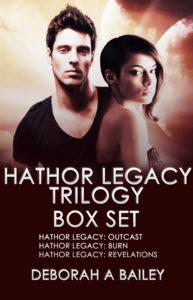 When the inhabitants of Earth colonized other planets, their terraforming process released an illness that later manifested itself in the population by causing death or the development of psychic abilities.

Those mutants with the talent became the Guardians on the planet Hathor, compelled to serve as a security force for the ruthlessly monopolizing Novacorp Intergalactic, Inc.

But what happens when a corporation hierarchy controls an entire world and leaders who originally wanted only to do good become corrupted and self-serving?

Hathor Legacy: Outcast: On the planet, Hathor, a powerful PSI group called the Guardians serves as the security force for Novacorp. Nadira, as one of the most powerful Guardians, is expected to use her intuition and telekinetic powers to keep the capital city safe from thieves and intruders. Jonathan Keel, son of a mine CEO is wealthy, privileged and used to getting what he wants. Security is on high alert as Nadira and Jonathan race against time to solve a crime. But discovering the truth may separate them forever.

Hathor Legacy: Burn: On the planet, Hathor, Guardian Nadira uses her PSI abilities to investigate a rash of fires and puts her life on the line when she uncovers a conspiracy that threatens to destroy the Guardian organization.

Hathor Legacy: Revelations: The worlds of the Guardians and Novacorp are put on a collision course as old scores are settled and long-hidden truths are revealed. An enemy returns to spark new tensions and Nadira and Jonathan’s lives, and Hathor, will never be the same.