This post is part of a virtual book tour organized by Goddess Fish Promotions. Tracy Ross will be awarding a $25 Amazon/BN GC to a randomly drawn winner via rafflecopter during the tour. Click on the tour banner to see the other stops on the tour.

Binary Logic is the perfect merge of content and form—exploring concepts of literary genre with revelatory narrative. It is a collection of tales touching on relational dysfunction, the conflicts inherent in addiction and fear, and the legacy of female future time lords. The stories all create a bridge between the reckoning imagination and the spirit of free will and self-made destiny. Binary Logic quietly asks the question, “Where is the mind of our species headed and what is the next quantum leap of human consciousness?”

Read an Excerpt of Binary Logic 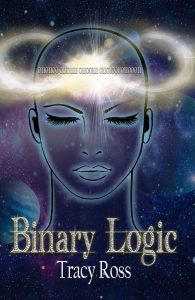 It was then that I realized I was in it for the both of us. My father and I against the anguish. At one point, during the early hours of morning, the crying faces had all gotten loose and were crawling up the walls and dropping from the ceiling like smokey apparitions from Dante’s Inferno, liquid shadows of creeping hunger, an infestation of screaming mouths and terror-stricken eyes, the reality of the walls closing in on me like a wriggling, dark prison. In my panic and shock, I finally blacked out, leaving the room for the numbing promise of sleep. I welcomed unconscious bliss.

Note to self: pain is a manifestation. It lives like a beast, a breathing, hungry creature, unable to free itself from destiny, unable to make the choice to release itself because it is comfortable in its tragedy. It is easier to go on in pain, then to go through to the other side where there is peace. The fear stops you. It prevents you from going all the way.

Binary Logic is a work that features different kinds of fiction in one collection. It has science fiction, horror, minimalism, absurdist, surrealism, Gothic, experimental, Victorian romance, existential, and suspense. I wanted to address all of the different genres of fiction in one volume while at the same time addressing a larger theme, that of binary choices and opposites, the Yin and Yang, the positives and negatives of the universe.

I think there is a revolution underway of cross-genre fiction happening where there is paranormal romance, environmental sci-fi, Gothic existentialism, and absurdist horror. I find this fascinating and uplifting in creating a resurgence of interest in fiction as a form and expression of the avant guard, the new, and pushing literature forward as a living art on the cutting edge.

I come from a long tradition of being a poet and studying metrical verse. There, we are concerned with the truncation of language in its purist form, to shave away at the frivolities for the most economical expressions of emotion. In fiction, however, there is a freedom to explore the reaches of imagery, metaphor, and allegory, ultimately intertwining genre themes wherever the imagination takes us. 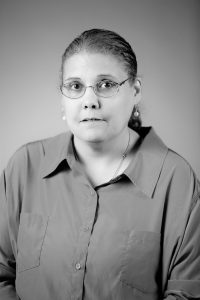 Tracy Ross is the author of three poetry volumes and the fictional narrative Certainty of One—A Tale of Education Automation. Her latest work, Binary Logic is a short story collection which touches on many genres—surrealism, horror, magic realism, and science fiction. In Binary Logic she tries to not be tethered to one type of story but attempts to explore the metaphors and symbols behind the dualities of choice, free will, and decision.

Ross is a graduate of Augsburg University’s MFA program and is a life-long student of the metaphysical behind language as well as consciousness studies. She has lived in Detroit, Chicago, and the Boundary Waters Canoe area in upper north Minnesota. As a youngster she progressed straight from Judy Blume books to Franz Kafka, making a giant leap into existentialism by the age of nine. She is also a student of film and popular culture, working on a new book of essays on life, liberty, and the pursuit of media. She currently lives and works in Minnesota.

Tracy Ross will be awarding a $25 Amazon/BN GC to a randomly drawn winner via rafflecopter during the tour.

Meet the Character Day! A Chat with Prince Dalton from A Most Intriguing Temptation