This post is part of a virtual book tour organized by Goddess Fish Promotions. Gail Koger will be awarding a $25 Amazon or B/N GC to a randomly drawn winner via rafflecopter during the tour. Click on the tour banner to see the other stops on the tour. 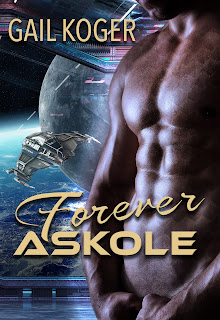 My name is Ella McAllister, I’m a psychic witch and a healer. My life is kinda nuts. Not only do I have the Coletti hunters chasing me, but now I also have a very determined Askole High Commander after me. Why? I shot his ship down and it crash landed, and it blew up. Yep, itty-bitty pieces everywhere. My bad, but his ship was a dead ringer for a Rodan Marauder, and it was my civic duty to blow the enemy spacecraft out of the sky. Wasn’t it? Any hoo, I healed his owies and boogied.

I thought that was the end of it, but oh no. For some unknown reason, Sariel, the Askole High Commander, decided I would make him the perfect mate. As if. I think the blow to his head made him completely bonkers.

Sariel informed me the mating dance had begun and there was nothing I could do to stop it. The idiot had obviously never dealt with a witch before. I didn’t have the time to play games with him, so I did a little abracadabra alakazam and ran.

Sigh. The persistent Askole found me. Now I have a decision to make. Keep running or surrender to the High Commander. He is a damn good kisser.

Would the mating dance bring two lonely souls together? Who knew?

Read an Excerpt of Forever Askole

“He was your lover?” Sariel queried in disbelief.

I cringed with embarrassment. “Briefly. I fell for his lies and didn’t see his true nature until he tried to sell me to the hunters.”

“I will never betray you or lie to you,” Sariel stated.

“So, you keep saying, but I’m not looking for a mate nor do I need one.”

Sariel’s tentacles stood out from his head. “A lie. Your loneliness drove you to bed a traitor.”

“Mating with you,” I enunciated clearly.

“As a warrior, you can challenge me to combat to stop the mating dance.” Sariel’s rather toothy grin was alarming. “Do you dare duel with me?”

In hand-to-hand combat I wouldn’t last ten seconds. “How about I teach you a little-known fact?”

Sariel’s helmet formed over his head, and he asked warily, “What would that be?”

“Never mess with a witch. It doesn’t end well.” I shouted my power word, “Sufflamine!” A thunderous cracking boom rent the air. A second later, a shockwave of energy hit Sariel and flung him out into the ocean.

He hit with a big splash and sank beneath the surface. “Excellent tactical move.”

Seriously? He sounded almost proud of me. “Stay away from me or next time I won’t be so gentle.”

“There is no where you can run that I cannot find you,” Sariel replied. 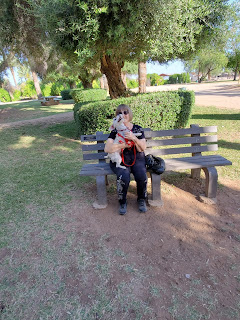 I was a 9-1-1 dispatcher for the Glendale Police Department and to keep from going totally bonkers – I mean people have no idea what a real emergency is. Take this for example: I answered, “9-1-1 emergency, what’s your emergency?” And this hysterical woman yelled, “My bird is in a tree.” Sometimes I really couldn’t help myself, so I said, “Birds have a tendency to do that, ma’am.” The woman screeched, “No! You don’t understand. My pet parakeet is in the tree. I’ve just got to get him down.” Like I said, not a clue. “I’m sorry ma’am but we don’t get birds out of trees.” The woman then cried, “But… What about my husband? He’s up there, too.” See what I had to deal with? To keep from hitting myself repeatedly in the head with my phone I took up writing.

Gail Koger will be awarding a $25 Amazon or B/N GC to a randomly drawn winner via rafflecopter during the tour.