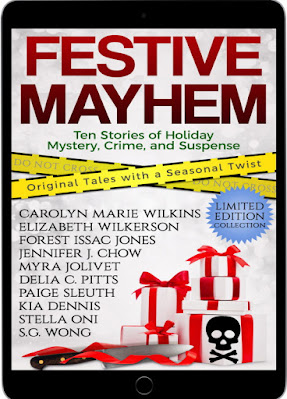 If you’re looking for a good mystery with a little holiday twist, look no further. Today I’m participating in the FESTIVE MAYHEM Book Blast featuring 10 talented authors with stories of mystery, crime, and suspense with a holiday flair.

Ten crime writers of color
have teamed up to offer you the gift of escape this holiday season.

From Christmas crime capers to Thanksgiving thrillers, historical hard-boiled to contemporary cozies, mystery fans of all genres will find something to love in this limited-time collection of exclusive, never-before-published seasonal short stories.

What you’ll find inside:

• “Pipe Dreams” by S.G. Wong. In this hard-boiled Crescent
City short story, infatuation and passion drive Minnie Chen straight into
danger as she tries to best the City’s most glamorous private detective in a
reimagined 1930s-era Chinese Los Angeles.

• “A Christmas Tip” by Elizabeth Wilkerson. A surprise
Christmas bonus becomes too tempting for Philadelphia nursing assistant Brianna Byers to resist—even if accepting requires some skillful skirting of the law.

• “The Stranger in the House” by Stella Oni. This London House
Mystery prequel stars Elizabeth Ojo, a Nigerian housekeeper at a posh guest
house, who finds her Christmas intersecting with that of a mysterious resident
in trouble.

• “What Lies Inside” by Kia Dennis. A tormented university
professor falls deeper and deeper into a destructive obsession in this
harrowing tale of love and longing.

• “A Pub, Bed & Breakfast & A Dead Body” by Forest Issac Jones. A
dark past becomes the deadly present when North Carolina police detective Ike
Coates and his intrepid young partner are tasked with determining the cause of
a suspicious death.

• “The Holiday Murder Mélange” by Myra Jolivet. This Sarah
Doucette Jean-Louis short story follows the Creole P.I. around the San
Francisco Bay Area on her quest to figure out who killed a man outside of her
office.

• “Those Holiday Blues” by Jennifer J. Chow. Jasmine, aka
“Jazz,” can’t escape the tragic past when an old boyfriend asks to meet on the
anniversary of his mother’s death.

• “Holiday Holdup” by Paige Sleuth. In this Cozy Cat Caper
Mystery Short, Imogene Little gets tangled up in a Christmas Eve bank robbery orchestrated by none other than Santa Claus himself.

DEATH IS THE FAIREST thing in the world. Nobody has ever talked their way out of death. Death takes us all—the kind, the mean, the sinners and the saints.

This is David Jacoby’s story, not mine. The main thing you need to know about David Jacoby: he didn’t deserve what happened to him, nobody ever does. I didn’t ask for the job, but no police detective ever does. Bad stuff happens to detectives. A number of them get killed. Some lose friends, marriages, kids. A few of them cross over to the dark side so gradually that they never see it coming until it’s too late to turn back.

I felt like I was relaxed for the first time in months. I was a legend who had been with the police for twenty-five years.

“Of course, the South is the best, right?” asked Captain Mike Akens, inhaling deep through his long, distinguished nose and out of his mouth in an approving manner. His voice rang like a metal dipper hitting a bucket of water.

Detective April Watkins and I agreed with the opinion enthusiastically. It had been the Walkertown County Police Captain’s idea that we should participate in a weekend outing to the small country town of Walnut Cove. The town was minutes away and a part of Walkertown County, North Carolina. There had been snow in the Appalachians for a week now, the first real snow of the winter. In this part of North Carolina it had only been a cold sleet, bitter and unrelenting, and it had been dark all week. For days everyone had been depressed by the weather, but the holiday festivities of the season had helped brighten the nights, making the group feel more optimistic.

When not working and wearing his custom fit white Stetson, Akens was a passionate gardener and lavished over tiny flowers with insanely long unpronounceable Latin names with an eagerness even stronger than what he showed on his investigations.

“Our cell phones should be shut off and nobody knows who we are,” observed Akens. “That was the plan. Are you ok with that Detective Coates? I know you are attached to that iPhone of yours.” He laughed, the cackle popping like pine logs in a cooking stove.

I have had years of practice in letting Akens’ comments wash over me like a duck’s back. He usually called me Ike, but when he was serious he used Detective Coates. I laughed and responded as I rubbed my bald head. “I think I’ll be ok for a weekend.”

This anthology is only available for a short time, so grab it now before it’s gone. It would be criminal to miss it!

FESTIVE MAYHEM is available at the following sites: 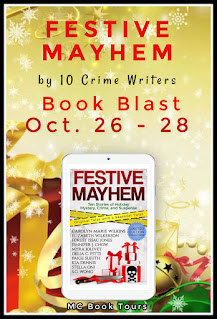 Be sure to enter the giveaway below. If the widget doesn’t work, just click HERE to enter. You can read more about this fascinating book by visiting the other stops on the Book Blast.

Thanks for stopping by today. Don’t you just love a good mystery with a holiday theme?