This post is part of a virtual book tour organized by Goddess Fish Promotions. L. Simpson will be awarding $10 Boroughs Bucks to a randomly drawn winner via rafflecopter during the tour. Click on the tour banner to see the other stops on the tour. 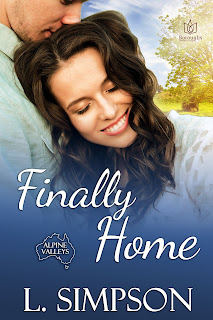 Ben McTavish is besotted when he sees a vixen in striped leggings own a cringe-worthy moment and turn it into a hilarious bit. He can’t stop thinking about her even though he puts his foot in his mouth every time he tries to get to know her. Ben would love to spend some time with this woman who has captivated him, but he needs to get his farm established before the bank takes back the land.

Kate Bloomington is all about whipping her life into shape, including getting to know her grandmother who she is now caring for. When she meets Ben, also known as Saint McT since he helps all comers, she pushes him away. Somehow, he shows up at every inopportune moment, mortifying her and enticing her at the same time. She learns that he needs help as much as she does, and together they create a love that is unbreakable.

True to his word, Ben was at my door right before eight in the morning. I was running a little late because I was struggling to focus. My emotions were a tumble, and while I was unable to deny my excitement at seeing him despite the fact he was Saint McT and I was a hot mess, I was still trying to bury the events of Friday night. Images of Frank would pop up, and I questioned my decision to do nothing. But the system wasn’t fair. I needed to move on. I had just started to get my life back, to feel like I belonged, and after being alone for so long, I simply couldn’t go back. It wasn’t right, but I couldn’t see any other option.

“Do we have time for coffee?” he asked as I got into his truck.

“Of course,” I said trying not to turn into mush as I took him in. He was dressed casually again, and while I missed the suit I’d caught a glimpse of, his navy woolen jumper and fitted, faded jeans had my mouth watering.

“Great,” he said and drove us straight to the bakery. While we ordered coffees, every local in the place stared at us. Their gazes sharpened when Ben put his hand on the small of my back as we walked out. I wanted to tell them all he was just being Saint McT, but it was hard to concentrate because my body came alive at his touch and I was within smelling distance. Yes. That’s right. The pastries held no sway now. I was all about Ben and his sexy, fresh soap smell. This trip was going to be a nightmare. Would it be easier or harder on the back of his bike?

“Do you not ride your bike often?” I found myself asking, trying not to sound hopeful.

“Not as often as I’d like. I didn’t think you’d appreciate it in that skirt,” he said grinning wickedly at me. I blushed.

“Have you ever been on one?”

“No way, my mother forbade them.”

“Well, anytime you want a ride…” he trailed off and I laughed, blushing.

As a girl growing up in Australia, Laura was lost in the world of Anne of Green Gables and Little Women. During high school, volleyball dominated her life. There had to be something positive about being 6’1” with red hair. Representing Australia from a young age she eventually took a scholarship at the University of Iowa. Living in America and being a full time athlete in a college town was an eye-opening experience and lots of fun (from what she can remember). #gohawkeyes

Returning from the States, her career took a different turn as she started working at the Red Cross and completed her Masters of Law in Human Rights. As one of the few non-lawyers in the class, her essays were far more floral than the rest, something that caused the discerning professors to shake their heads. Through working and studying, she realised there are other ways to win hearts and minds.

While she’s spent the last 14 years as an advocate against poverty and homelessness, the desire to change the world through storytelling has only got stronger. She now lives in the Alpine Valleys of North East Victoria, Australia with her husband, daughter, son, two dogs and seven chooks. When she’s not doing the whole mum thing, working at a homelessness agency, renovating her farmhouse, or trying to do laundry bleary-eyed at midnight, she is writing.

L. Simpson will be awarding $10 Boroughs Bucks to a randomly drawn winner via rafflecopter during the tour.