Archer Miller will be awarding a $25 Amazon/BN GC to a randomly drawn winner via rafflecopter during the tour.

Humanity has spread to the far reaches of space with The Golden Door, a planetary colonization monopoly, selling off every desirable and not so desirable planet to desperate settlers.

Each new world comes with new challenges, and to meet that challenge the children are evolving.

When Pieter, and other gifted children like him, become the target of government research they must fight not only for their lives but the future of their kind. 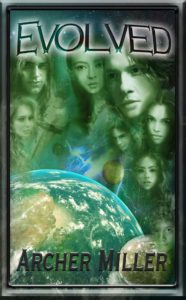 Mary’s telepathic shout jolted him out of a sound sleep. As his eyes opened flashes of blue light filled his room. He turned his head to check the common area between the cells. Arcs of lightening sizzled through the room. Kakogo cherta, he thought, watching the dancing discharge.

It’s Mike. He’s having a nightmare. Mary sounded frantic inside his mind.

Can’t you switch him off?

He can’t hear me.

Pieter stood and approached the barrier between his cell and the common room. The crackling discharge reminded him of a small Tesla coil his teacher brought to class. The lightning followed any hand or finger that touched the glass sphere. But this was on a scale he had never seen.

His eyes focused on the room across from his and  caught sight of Joan watching the lights. They were all watching, too terrified to do anything to stop it.

Pieter pressed his hand to the clear wall and immediately the blue, static lights flowed to the spot. He felt no pain. The electrical discharge stopped at the other side of the wall, just like the Tesla coil in school. The pops and crackles from the common room made him wary. As he listened he could hear the electric lock mechanism on his door cycle on and off every few seconds.

Has he ever done this before? He asked.

Pieter listened for his door to open and pushed his hand against the clear panel.

A very good friend suggested am idea for a simple story about a bunch of strange kids on the run. He suggested they all have super powers of some kind. I’m not sure what part of that grabbed my muse but since I prefer to ground my fiction in actual science I started doing home work. I studied genetics, evolution, exoplanets, faster than light travel, gene markers and on and on. Out of all that rose the story I wrote called Evolved.

If I did I think it would be Mike’s nightmare. He’s a young man from a troubling past who happens to be able to control electricity. In his nightmare he sets off an electrical storm in the confined quarters where he and the other seven subjects live. Pieter (My hero) manages to stop Mike from himself and the other captives as well. Read it. I think you’ll like it. Look at chapter 4.

The volume of research involved. Besides the homework I already mentioned I had to study the Russian language and Orthodox customs. I studied Norse language and customs. Names and history that pop up throughout the book. So don’t let my hard work go to waste. Look for Easter Eggs all through the bok.

I’m a homebody. I love to garden and cook, especially baking. It’s no mystery why bread plays a bib part in the social order on my characters.

The creation. I have an entire universe to fill with people and animals and a history. Besides, the voices in my head won’t shut up if I don’t write down what they tell me.

Don’t settle. Find a publisher and just as important, an editor you can work with. The people who run my publisher are writers themselves and that makes a huge difference. My editor is someone I trust implicitly. She isn’t someone to pat me on the head and tell me hoe good I am. She is ruthlessly honest and brutally direct. She pushes me to be a better writer and that is what I like most about her.

How do you go about choosing the names for your characters?

Ethnic origins, occupation and sometimes historical reference. Many family names began as a trade, Cooper, Fletcher, Smith, Wheelwright. Wainwright, Barber and so on. I won’t give away the game but pay attention the the last names in my story.

This the first book I’ve had published but there are two more in this series in the pipeline as well as a two book epic fantasy.

In one way or another I have been a writer for about fifty years. As a writer for radio and theater. Later I was a copywriter for several Advertising Agencies. I tinkered with writing stories for years before finding my niche.

I’m 66 and old fashioned so print. Although I have e-books as well and I enjoy them too. 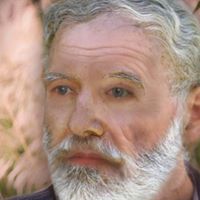 Archer Miller emerged from the East Texas hill country and set his sights on finding the life of which few of his contemporaries dreamed. In 1974, he migrated to Boulder, Colorado to enroll at the Naropa Institute – now known as the Naropa University, a tiny Liberal Arts college founded by the renowned Tibetan Buddhist scholar and lineage holder, the Ven. Chogyam Trungpa Rinpoche (1940-1987). Rinpoche was enormously influential in spreading the teachings of Tibetan Buddhism to the West.

Archer earned a degree in herbs and creative writing. He was a four-year Letterman on the Varsity Competitive Meditation Team.

After graduating in 1978, he took a year off to hike the Jack Kerouac literary trail. He became a top freelance gun-for-hire with dozens of ad agencies across the south and southwest. As a way to deal with the proliferation of Disco, he took up Zen Archery.

Archer Miller will be awarding a $25 Amazon/BN GC to a randomly drawn winner via rafflecopter during the tour.