Four Days with Jack — What Will People Think? 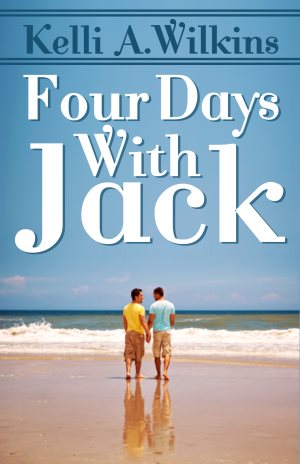 Today I’m sharing a look at the making of my gay romance, Four Days with Jack. In this contemporary novella, best friends David and Jack embark on a sexual relationship. David has always loved Jack and has fantasized about being his lover, but he lacked the courage to admit his feelings—until now.

Four Days with Jack is one of the few books I wrote without an outline. I think not having a pre-planned structure let the characters write their own story (so to speak), and took the book in new directions.

At first, I didn’t know what the story would be. All I had was a basic plot (straight guy comes out to his gay best friend), a title, and one pivotal scene that takes place in a bathroom. (For those of you who have read the book, you know which scene I’m talking about – but I won’t give it away here.)

From there, I let my imagination wander and came up with the resort, the rest of the plot, and the unusual cast of characters that Jack and David encounter. As I wrote, David quickly revealed a major conflict—inner turmoil. Over four days, David and Jack learn a lot about themselves, each other, and what sacrifices they’ll make to stay together.

David has kept his true desires a secret from himself and everyone else. He’s afraid of what people will think about him if they know (or even suspect) that he’s gay. How will they react? Will they judge him? If so, how will his life change?

These aren’t the typical types of questions that my straight characters have to face in their romances. And this line of thinking really got me wondering about what it’s like for people to come out in real life. Will they be shunned by friends and family? Should they tell anyone? Live a lie? Move to a new state? What if they live in a state that’s more conservative and not gay-friendly? What will their coworkers think? Is their preference really anybody’s business?

I picked up on this theme of “What will people think?” and ran with it. In the book, David points out that Jack’s family disowned him when he came out, and David doesn’t want to go through the same type of heartache. Jack’s reply is pretty much: “So? They’ll get over it.”

As I was writing this story, I considered “what people would think” about this book. How can a woman write a gay romance? What will people think about the love scenes? Then I reminded myself that I’m a writer, and I create the characters and scenes that make up the book. Basically, the story needs to be told, and I’m the one telling it.

Writers need to turn off their internal editors and forge ahead with the story as it should be (and needs to be) told. If we constantly worried about what grandma would think about our writing, or if we were afraid to open up and let the characters and story take us into the bedroom, we’d never write anything except G-rated bedtime fables. And if a friend/relative/whoever has a problem with the subject matter, Jack’s right: they’ll get over it.

Or maybe not. One reader commented that she didn’t like the antagonist (Frank). As a writer, I’m glad to hear that! Frank is a blatant homophobic ass who says some pretty awful things to David and Jack, and he treats his own wife like crap.

So why is he in the story? For two reasons: 1. to show that not everyone accepts openly gay couples, and 2. to add a level of confrontation and intolerance that help band David and Jack together during a crisis moment. Is Frank an over-the-top stereotype? No, I don’t think so, because he’s a compilation of a few real people I’ve encountered.

Even in this day and age, some people are offended by gay romances and consider them “icky” or immoral. (Yes, I was actually told by a book reviewer that gay romances are icky!) My philosophy is pretty simple when it comes to that: it’s a free country, so read whatever you want —but don’t expect me to censor what I write because you have a problem with it.

This re-release is a bit different from the original version. I’ve given the story an overhaul and made a lot of changes. New scenes were added, others were completely revised, and a few were deleted. I was happy to make one significant change to this edition: when the book was originally published by Amber Quill Press, gay marriage wasn’t recognized. I’m pleased to report that I’ve included a line where “same-sex couples are getting married all over the country.”

Now more than ever, I’m just as proud of my gay romances as I am of my straight romances. Why? Because I’m a romance writer—and in my books, everyone deserves to be in love and live happily-ever-after with whatever partner they choose.

And that’s the way it should be… in fiction and in real life.

Here’s the book summary and a mild excerpt:

When David invited his best friend on vacation, he never expected them to fall in love…

Spending four days in a tropical paradise with Jack is a dream come true. For years, David has lived a lie and denied his romantic feelings for Jack. Now that they’re together in an isolated Caribbean resort, he finally admits what he really wants—to be Jack’s lover.

Jack has been in love with David for years and is encouraged by his desire to explore a sexual relationship. He’s more than willing to introduce David to the life he has always fantasized about. Their sizzling nighttime encounters confirm David’s long-hidden cravings, but what will happen when they leave the resort?

Will David come out and start a new life with Jack? Or will he go back to his old ways and risk losing the best friend he ever had?

Jack finished brushing his teeth and studied his reflection in the mirror. He looked happy for a change, and for once, he felt content. How many years had he waited, prayed, for this night? He’d been hopelessly in love with David forever. Now they were together. But why? What had prompted David to make the leap?

Obviously breaking up with Allison had played a part in his sudden “conversion,” but what would happen when they got home? Would David come out to his parents and everyone else? Or keep living a lie?

He flicked off the bathroom light and went into the bedroom. David’s steady breathing told him he was asleep. It was no wonder that he was exhausted. They’d had a long day—flying in from Philly, sitting in the sun, drinking… and now this. He smiled. And they still had two more nights in their island paradise.

He walked to the veranda, slid the screen door open, and stepped outside. The night air was a bit chilly, yet the cool breeze felt refreshing. He gazed toward the ocean. A quarter moon reflected off the water. In the distance, he heard calypso music and people laughing. That was an interesting thing about the resort; although hundreds, maybe thousands of people were around, it felt like they were alone.

You have to tell him about Andre. It’s only fair.

He leaned against the railing and sighed. Eventually David would ask him how he could toss aside his live-in boyfriend of two years. He was too morally straight not to question if this was considered cheating.

Ironically, he had been dating Andre exactly as long as David had been with Allison. But Andre had kicked him out a week before David and Allison called it quits.

Despite what happened, part of him still loved Andre. But Andre had only been interested in getting hard and getting off. There was no romance between them, just whatever it took to come. David was different. When he was with him, it wasn’t about sex. They had a connection. They belonged together.

And besides, he couldn’t go back to Andre, not after what he did. It was one thing to have an argument and move out, but when the person you loved hit you—

“What are you doing?”

David’s sleepy-sounding voice broke him from his thoughts, and he cleared his throat. “Watching the water,” he said, then reentered the room. Thinking about the situation with Andre depressed him. Right now, he felt like curling up with David and telling him everything—but he didn’t want to burden him.

“Should I get a wake-up call?”

“Nah, let’s sleep in.” He stripped, then pulled the sheets back and climbed into bed. Instinctively, they rolled onto their sides and kissed.

“Thank you for tonight,” David said, nestling close. “What can I do for you?”

Order your copy of Four Days with Jack here:

I hope you’ll check it out. I fell in love with the characters, and I hope readers will too. It’s got a good blend of humor, drama, and plenty of sizzling love scenes that will heat up your summer!

Kelli A. Wilkins is an award-winning author who has published more than 100 short stories, 19 romance novels, and 5 non-fiction books. Her romances span many genres and heat levels.

Loving a Wild Stranger was published in January 2017. This historical/pioneer romance is set in the wilds of the Michigan Territory and blends tender romance with adventure.

Kelli’s third Medallion Press romance, Lies, Love & Redemption was released in September 2016. This spicy historical western is set on the Nebraska prairie in 1877.

Her writing book, You Can Write—Really! A Beginner’s Guide to Writing Fiction is a fun and informative guide filled with writing exercises and helpful tips all authors can use.

Visit her website, www.KelliWilkins.com to learn more about all of her writings, read book excerpts, reviews, and more. Readers can sign up for her newsletter here: http://eepurl.com/HVQqb.

CATCH UP WITH KELLI