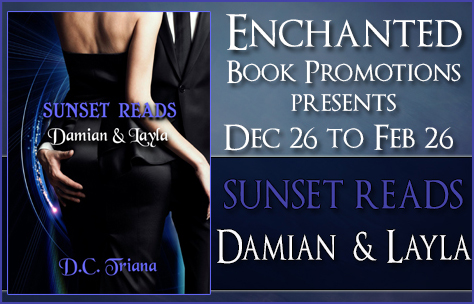 It’s been one year since Agent Damian Trent left for Washington without a word.

One year since he’s seen her beautiful face.

One year since he’s heard his name on her lips.

He’s been recently called back to New York City on assignment, to catch a criminal who’s trying to infiltrate Sunset Reads. The last thing he expects is to work side by side with the woman he turned his back on.

Having her close is an unwanted distraction that he’s more than willing to ignore, if only she wasn’t so damn tempting.

Everything seems under control, until a night of feverish passion has him abandoning all thoughts of reason. Now, he will do everything in his power to get her back, and even more so to protect her.

Layla Reece wants nothing to do with the man who left her a year ago.

The man who took her heart with him, leaving her broken.

After a year of trying to forget Damian Trent, she is finally ready to move on.

But trying to forget him becomes a tedious task when he suddenly reappears in her life.

Although she fights to stay away, his magnetism is too strong and she finds herself giving into the deep timbre of his voice, and the strength and safety of his arms.

Staying away from Damian turns out to be futile, especially when his kisses consume her and his heart shatters the walls she spent so much time building.

Finding herself in danger, she now has to turn to the only man she trusts to keep her safe, but can she trust him enough to give him her heart once again? 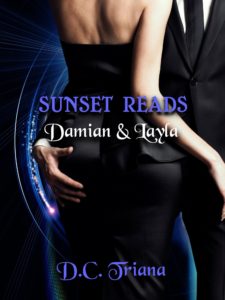 Damian Trent was just as hot as he was daring, and as Layla Reece watched him that night, she slowly became interested in the man behind the mysterious, silver gaze. Lost in thought, she was interrupted by her best friend who handed her a drink.

“He is gorgeous,” Cristina Cruz said, the renowned romance author and wife to Sunset Reads’ CEO, William Jameson. They had recently married and were currently expecting their first child. They were probably one of the happiest and most in love couples Layla had ever seen. She could only hope she’d someday have what they did.

“Yes, I suppose he is,” Layla replied, intending to seem uninterested, but not succeeding in the least bit.

Cristina eyed her friend closely. “You should go talk to him.”

Layla shook her head, stealing a glance at Damian as he leaned against the wall and spoke to William. “No, he’s probably not interested anyway.”
Cristina looked over at him and her eyebrows shot up. She gently nudged Layla and said to her friend, “I doubt that very much.” She smiled and then walked away just as Damian Trent headed towards them.

Layla took a long sip of wine and watched him carefully over the rim of the glass as he crossed the room. He was tall and imposing. He moved like a swift panther, taking long strides that brought emphasis to the strong muscles in his thighs.

“So, you are Layla Reece?” His voice dripped of sensuality, evoking sinful thoughts of naked bodies tangling beneath cool sheets.
She nodded slowly, cautious of the man in front of her. “And you must be Damian Trent.”

He smiled, the gesture wrinkling the corner of his eyes, making him seem all the more rugged. His intense gaze caused a shiver to run through Layla.

“I’ve been wanting to come over and talk to you for quite some time. Well, ever since I saw you looking at me earlier.” A smile played on his lips.

Layla’s eyebrows shot up at his comment, “I didn’t realize I was making you feel uncomfortable… nor that I was being so obvious.” She muttered the last part.

Damian’s eyes darkened, turning a steely gray. “So you admit you were looking?”

“Well if you saw me, then there doesn’t seem to be a point in denying it.” She shrugged, holding his gaze for a moment.

Damian searched her face, intrigued by her delicate features and her boldness. At that moment he decided to take a chance. “Do you want to get out of here?”
She furrowed her eyebrows, giving him a questioning look.

Damian leaned in, keeping his voice low. “I just want to talk. I promise. But if we don’t disappear soon I fear we will unfortunately continue to be the center of attention.” He gestured to the room and as Layla looked around, sure enough, they had an audience. He turned back to her. “Meet me outside in ten?” he asked.
Layla licked her lips nervously and nodded slowly. “Okay,” she whispered.

Ten minutes later, and after evading her friends and saying hurried goodbyes, she managed to escape. Then she found herself seated in a black, Dodge Charger heading God knows where with a man she barely knew.

What is it about this man that draws me to him?

“You keep staring,” he stated, his eyes glued to the road.

Layla realized she was angled toward him in her seat, and forced herself to face forward. “Sorry. I don’t normally do things like this.” She bit her lower lip and turned to look out the window.

I’m not sure what the hell’s gotten over me, she wondered as they drove.
His lips curved into a slight smile. “I figured as much.”

He pulled over on the side of the road and parked the car. Layla spotted a small restaurant on the corner, and through the windows she could tell it was almost empty. Damian opened the door, and helped her out of the car. His hand was warm as it engulfed hers. He placed his other hand on the small of her back guiding her inside. His touch was light yet brought shivers down her spine. The intimacy of the small gesture surprised her.

They took a seat in a back booth where there was some semblance of privacy, and he slid in across from her.

He leaned in. The closeness of his silver gaze causing her to fidget.

“You’re cheeks are flushed,” he whispered, trailing a fingertip down her face. He didn’t understand why, but he wanted to touch her.

They both ordered a drink and sat back, carefully studying each other.

Damian had wanted to talk to the beautiful, green-eyed vixen from the first moment he saw her at William’s place. Her features were soft, with high cheek bones and full lips. She has a perfect sun kissed glow, and her skin seemed so soft that he immediately wanted to trail his hands down every curve of her body, just to satisfy his curiosity. She was tall and reached his chin when she stood next to him, but he liked her height, mostly because she had the longest, shapeliest legs he’d ever laid eyes on.

When he’d decided to approach her, he knew she wasn’t going to be a woman who’d be easily persuaded. Her direct approach showed openness and an innocence that captivated him. He suddenly wanted to be alone with her, to actually get to know her. The only problem with all this was that the more he talked to her, the more he wanted to delve into dangerous territory. Territory he knew was impossible for him to enter into.

Layla smiled. “I suppose you can’t talk about your job since it might be top secret,” she teased, trying to break the ice.

He smirked. “You’re not entirely wrong.”

“So what can you tell me about yourself, Agent Trent?” Her green eyes held his in anticipation.

He smiled wickedly and leaned in, bringing his face only inches away from hers. “What do you want to know, Miss Reece?”

Layla stared at those full, sensual lips, warmth spreading through her.

“Everything,” she replied breathlessly, her eyes widening when she realized she had spoken aloud.

D.C. Triana is a new romance author and novelist. She was born in raised in New York  and is currently residing in Florida. Last March, Her dream of publishing a romance novel came true with, Sunset Reads: William & Cristina. The novel is currently holding a 4.5 star rating on Amazon as well as GoodReads. She is excited to announce her second novel in the series, Sunset Reads: Damian & Layla, releasing on December 26, 2016.

When she is not delving into her hopeless romantic thoughts, she is expanding her experiences and traveling around the world. She also will not miss an episode of the Walking Dead, has an obsession with Superman, and has watched Pride and Prejudice at least ten times. An avid fan of all types of music and dancing; she enjoys cuddling up with her puppy Obi, and helping new authors like herself. You can visit her at http://www.dctriana/com, or be part of her newsletter where you can take part in giveaways, receive updates on upcoming storylines, and get reviews on hot new titles. Sign up for her Newsletter here: http://eepurl.com/bXH-P9

Win eBook copies of the book, and 3 $10 Amazon gift cards.