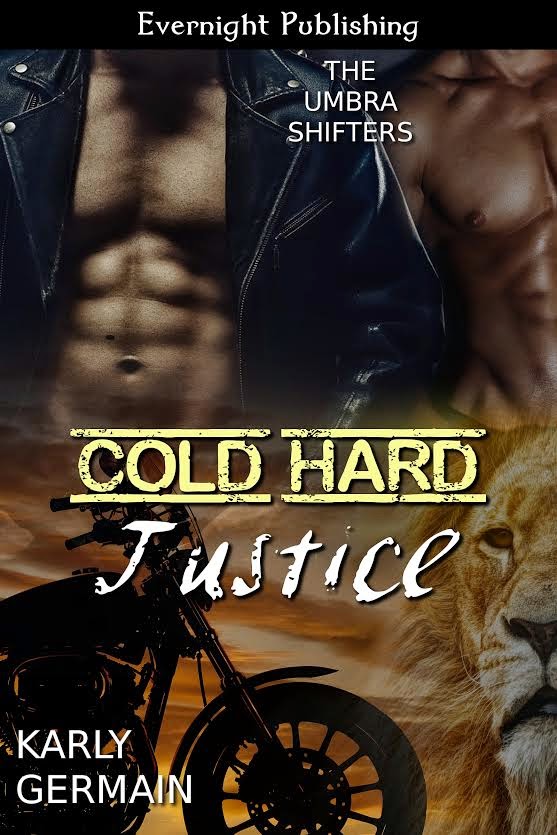 Undercover work sucked. As a shadow hunter for the Umbra, Justice Cameron was used to sliding into one dangerous situation after another. Infiltrating the motorcycle club, Pride of Kings, to wrap up two outstanding cases should have been quick and painless, turns out it was anything but. Justice didn’t count on Ethan Stone’s son, Xavier, to complicate his assignment.

Xavier Lennox doesn’t care for the ‘lion pride’ way of life, so the scarred, shy loner keeps to himself, living a quiet life in a small cabin at the edge of the MC compound. He ‘fixes broken things’, and no one is more broken than Justice. When Xavier finds Justice beaten on his doorstep, he never imagined he would feel such a potent connection. The big, gruff alpha fascinates Xavier, and it turns out, the attraction is mutual.

The shadow hunter is there for one reason only. No time for complications. No time for desire…or love. Or so he tells himself, because he’s there to mete out…cold, hard justice.

Justice had slept last night with a cold compress on his right eye and it must have helped, as he opened both and stared at him. “You slept all afternoon, and I found Levon asleep on your chest. It seems you’ve made a fast friend.”

Justice stroked Xavier’s cheek with the back of his fingers. “Not just the cat, I hope.”

He leaned in to the touch. “No. Not just the cat.”

Justice explored the raised scars on his left cheek. “How did this happen? Looks like…”

“Yeah.” Justice frowned. “Who hurt you?”

Something warm and tender bloomed inside Xavier. Justice cared. Hope also bloomed. Justice spoke the truth at breakfast. The mate connection could be accepted or rejected. Oh, God. How he wanted them to both accept it. Such a soul bond should not be ignored. It should be nurtured and cherished.

“My stepbrother, Rex. We were eight. You know kids. I invaded his space, touched his things. Actually, I think he was sorry afterward, in his way. He hasn’t hurt me since. He has…anger issues. Amongst other things.” Xavier laced his fingers through Justice’s. Such big hands. So warm. So gentle. Instinctively, he knew Justice would never harm him physically. His heart was another matter.

“He is. Here’s the surprising thing. I love him in spite of it. Though we’re not close and have very little in common, we are blood. Tainted blood, it seems.”

Justice’s eyebrows rose. “What do you mean?”

Xavier laughed brokenly. “Not sure I want to say. There is something between you and me and if I tell you, it may kill it. I know this is all too fast, but it’s the shifter way. I want you in my life, Justice. I want us to maybe…at some point…become mates.”

That Justice did not expect. At least, not yet. Sure, there was something between them, but…mates? Admiration took root deep inside Justice. Kudos to Xavier for just putting it out there. No bullshit with this guy. It was refreshing, but how to answer? Maybe he should take a page from Xavier’s book and be honest. After witnessing the mate connections between the Stones and the McNamees, seeing the love, respect, and the mutual desire which pulsated all around them, he began to long for such a commitment in his life. Suddenly, his undercover position became as complicated as shit.

“I’m not used to factoring in another person in my decisions. Nor am I used to baring my soul. Mates? I’m not dismissing it. But I think we should get to know each other better first.” Justice winced inwardly. How friggin’ lame.

“I agree.” Xavier leaned in and kissed him. The electric charge that shot through Justice at the gentle pressure of Xavier’s warm lips stunned him. Justice moaned and deepened the kiss. God, he ached for this guy.

“Lay back. Let me touch you. Let me show you how much I care. I will be gentle, I promise. Let me…love you.” Xavier whispered.

Justice slammed his eyes shut so Xavier could not see the yearning in them. No one, in all his fifty-two rough-and-tumble years of living had ever said those words to him.

WICKED HOT KILL by Karly Germain
#3 in the Umbra Shifters 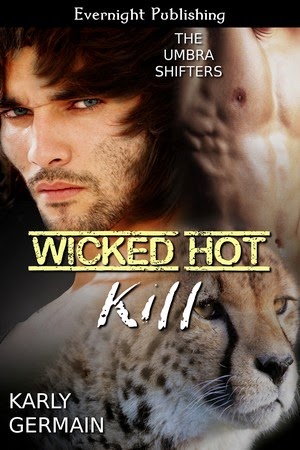 Blurb: Cheetah shifter, Killian “Kill” McNamee is the deadliest of shadow hunters—an Ender. If anyone in the Umbra world stepped out of line, got in his way, or became a problem, Kill lived up to his name. Hardened and soulless, Kill didn’t expect a brief encounter in an alley with a strange man to turn into something more serious. And thanks to a run-in with a pack of Werewolves, Kill finds himself in the kind of trouble he’d never before experienced.

Torin Stone, Dhampir, has lived many lives and experienced multiple heartbreaks through his long life and is not looking for any kind of involvement, especially with a wild, sexy, out of control cheetah shifter who is his complete opposite. After an attack by the Weres, Torin is the only one who can help Kill survive.

The more time they spend together, the stronger the bond between them. Torin will do anything to convince Kill they are mates. How can Torin resist rubbing against some—wicked, hot Kill?

#2 in The Umbra Shifters 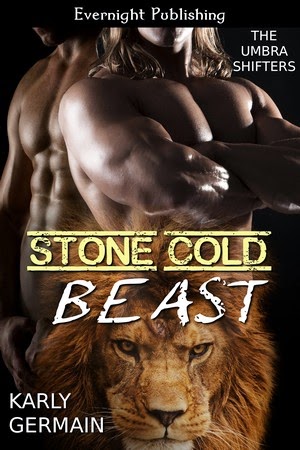 Ethan Stone, lion shifter, had lived many lives. He’d been a biker, musician, and an Umbran, or shadow hunter. Everything changed two years ago when a nightclub fire killed the members of his rock band and left him the only survivor. Now scarred and living the solitary life of a nomad, Ethan just wants to be left alone in his isolated world.

Daric McNamee, a cheetah shifter and also an Umbran, has been given an assignment. Ethan Stone. Find out what happened the night of the fire and recruit Stone back into the Umbran. Not an easy task considering Ethan is stubborn and wary. Almost immediately, both men feel a mate connection, but the last thing Daric wants is to be a submissive to a scarred, terminally angry lion shifter.

However, the attraction between them can’t be denied—though Ethan tries. When it comes time for them to part, will they admit they are mates? Can Daric convince Ethan he is more than a stone cold beast?

BUY AT EVERNIGHT PUBLISHING
BUY AT AMAZON
BUY AT ALL ROMANCE
BUY AT BOOKSTRAND
BUY AT BARNES AND NOBLE
HIS GREAT DANE by Karly Germain
#1 in The Umbra Shifters
Look for the short story in The Umbra Shifters ‘His Great Dane’ in in the bestselling ‘Alpha’s Claim: Manlove Edition’ 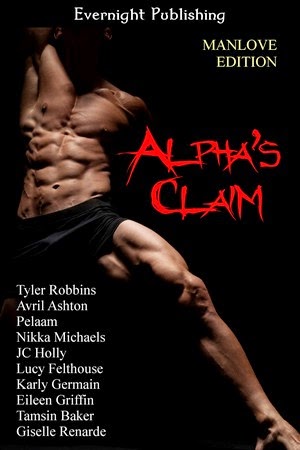 The shifters in our Alpha’s Claim: Manlove Edition anthology have one thing in common—they won’t take “no” for an answer. Whether they lead packs of their own, or whether they walk a solitary path, these alphas won’t let anyone stop them from claiming their men.

Lose yourself in these ten sinfully delicious love stories. After all, who could deny an Alpha’s claim?