Why Heroines Need Journeys Too 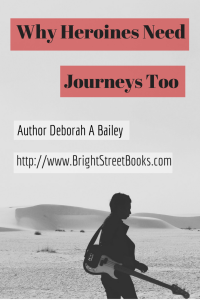 It’s probably safe to say that most writers are familiar with the Hero’s Journey,  or some variation.

Years ago I read  “The Writer’s Journey: Mythic Structure For Writers” by Christopher Vogler, which is based on Joseph Campbell’s work (and described in his book, The Hero with a Thousand Faces).

But it wasn’t until I took a mythology class with Susan Sipal, that I discovered that the Hero’s Journey wasn’t the only story. Actually, there is a feminine version and its based on the story of the Sumerian goddess, Inanna, an epic that describes her descent into the underworld.

Writers have used the archetypes in Inanna’s story to map out a Heroine’s Journey.  Victoria Lynn Schmidt did that in her book, “Story Structure Architect.”

Stages of the Heroine’s Journey

1. Perfect World – the heroine’s everyday world
2. Realization/Betrayal – an inciting incident and decision point
3. Awakening: – decision to take the journey
4. Descent – the heroine faces her fears but can’t turn back
5. Eye of the Storm – tests and ordeals
6. The Death – an actual or symbolic death
7. Support – help comes, possibly from the larger community
8. Moment of Truth – rebirth and facing the biggest challenge
9. Full Circle – heroine returns to the perfect world with more self awareness

In the second book of my series, “Hathor Legacy: Burn,” I used the Heroine’s Journey to create a character arc for my heroine, Nadira.

She starts out in a perfect world (or so she thinks) as a Guardian on the planet Hathor. Then as she starts investigating a series of fires, she discovers information that’s been hidden from her. After a series of setbacks, she’s forced to accept that she needs support from others in order to solve the crimes and confront the conspirators.

Her journey isn’t just about dealing with the threats to the perfect world, but she has to come to terms with her own identity as well.

When she gets to the full circle stage, she has a different awareness of herself, her relationship with Jonathan Keel (the hero) and the Guardian organization that she’s a part of. That stage also provides a jumping off point for the next story in the series to begin.

The heroine’s journey is not so much about taking a quest to slay the dragon, as it is a journey within to face her deepest fears. By addressing her own needs and desires, she can come to terms with herself and her place in the larger community.

In book two, Nadira must come to terms with her vulnerability and her strength. All the while, she has to accept that, though she’s stronger than most of the Guardians, she can accept help and support when needed. 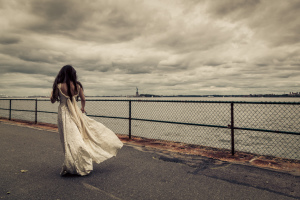 There are variations of the Heroine’s Journey, including a version in Kim Hudson’s book, “The Virgin’s Promise.” If you’re looking for an alternative to the Hero’s Journey (or want to read more about the archetypes) there are a number of resources that go into more detail. (Author Susan Sipal has a listing of workshops on her site.)

If you’d like to read more about Victoria Schmidt’s version, here’s the link to the post on the Sharper Stories site: http://sharperstories.wordpress.com/2013/04/06/the-feminine-and-masculine-journeys/

(A version of this article originally appeared on the Science Fiction Romance Brigade blog.)