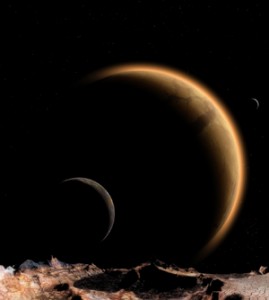 Believe it or not I came up with the idea for the Guardians from watching a PBS documentary on U.S. President Franklin Delano Roosevelt. Well, there were a few twists and turns between the idea and the execution. But ideas seldom go from thought to execution in a straight line, do they?

After they went into the details of how FDR was infected by the virus that causes polio, I wondered what would happen if that disease was as prevalent in the US today?

From that thought, I got an idea about a virus that would fundamentally change the person who became infected. But instead of having the virus unleashed on Earth, I chose a settlement on another planet. A person who survived the infection would be left with PSI powers. Though not just the ability to read minds or predict the future, they’d also be capable of moving objects and sending out energy blasts.

They’d have abilities like a superhero in any comic book, but they wouldn’t be necessarily fighting for truth or justice. They’d be used as a security force.

In book two of the Hathor Legacy series, Hathor Legacy: Burn, I reveal the origin of the Guardians. They’re descendants of settlers who were infected by a virus unleashed after the planet was terraformed and prepared for human habitation.

Instead of being superheroes using their extraordinary powers to save the day, they’re corporate employees doing a job for Novacorp Intergalactic, Inc.

In between my Twilight Zone binges, I read tons of Superman comics as a child. Strangely enough, I always felt a bit sorry for him. Separated from the rest of humanity by his powers and his origins, he was on the outside looking in. (Which explains why he would continue to juggle his Clark Kent persona. It was the only way to actually be connected to other humans.) Though the Guardians are also separated from the other humans on Hathor, they have their own culture and hierarchies within that culture.

They don’t get to choose their professions and they’re discouraged from having relationships with people outside of their group. Not only that, but once an individual develops abilities and becomes a Guardian, they’re forced to leave their family and give up their family name. Everything is done to strip them of who they were before so they can start a new life with a new identity.

Nadira (the heroine) has to fight convention when she decides to continue her relationship with Jonathan Keel (the hero). Yet, her mother, Minona also fought against the established order.

Some Guardians do push back in spite of the pressure to conform. As with any group, there will be outliers, but with the Guardians, if too many of them push back, it could destroy them and completely rip apart the fabric that holds the society together.

Novacorp needs them to hold on to their control, and yet the Guardians are strong enough to overpower them. At the heart of the story, conflict and tension exists between two groups that need each other for survival, yet don’t trust each other. And ultimately this conflict directly impacts the relationship between Nadira and Jonathan.

That’s how I got from FDR to the Guardians. Certainly not what I expected when I sat down to watch that program!

In the next part, I’ll share my inspiration for creating the corporate-run society on Hathor.